Michael Li gained great experience in jury trials and other evidentiary hearings before the Court.

We have tried dozens of trials to verdict and have successfully concluded several thousand cases for our clients.

We will work hard to protect you and your rights knowing the insurance company is not on your side.

Proudly Serving all of California

Zantac is a common antacid medication in the US. It can be purchased over the counter and with a prescription. It treats a varied number of illnesses like heartburn, acid ingestion, ulcers, erosive esophagitis etc. But if you have ingested this drug recently, you may have been exposed to a serious risk of cancer.

In September 2019, the FDA announced that it was investigating a possible risk of cancer in the common medication. It was discovered that Zantac products contain high levels of NDMA, which is likely a cancer-causing agent. And by April 2020, the FDA has requested that Zantac and all its generic forms should be withdrawn immediately. This is as a result of contamination with NDMA.

If you or a loved one has been diagnosed with cancer after being on Zantac medication, be it pancreatic cancer, stomach cancer, nasal/throat cancer, intestinal cancer or any cancer at all. You may be able to sue for damages. 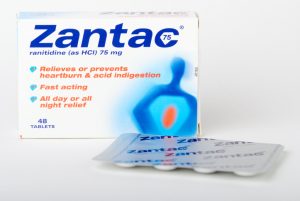 Our personal injury lawyers have been actively investigating cases in which individuals took Zantac or any other form of ranitidine and then developed cancer. If you have received a cancer diagnosis after ingesting the medication, contact us for a free, no-obligation consultation.

What does Zantac do?

Zantac which is a brand name for ranitidine belongs to a group of groups called histamine-2 blockers. These blockers work by reducing the amount of acid the stomach produces. This treats conditions like Zollinger-Ellison Syndrome, a condition in which the stomach produces too much acid.

Zantac is used to treat or prevent stomach and intestinal ulcers. It is also used to treat gastroesophageal reflux disease (GERD) and other conditions in which acid backs up from the esophagus and causes heartburn.Following the relapse of the patent on ranitidine, several other drug manufacturers have produced generic forms of the medication. Although, Zantac is still the most common and popular brand. It is manufactured and sold by the pharma giant, Sanofi.

How Does Zantac Pose a Cancer Risk?

The investigation embarked on by the US Food and Drug Administration on September 13, 2019 was part of a broader inquiry into possible carcinogens. This investigation of possible cancer risks also included heart failure and blood pressure medications. As a result of finding unacceptable levels of contaminants in these medications, the FDA recommended several recalls.

An online pharmacy, Valisure, had been conducting inquiries on ranitidine as part of its own internal processes since the spring of 2019. The pharmacy discovered that there were “extremely high levels” of NDMA, a possible carcinogen, in ranitidine medications.

The carcinogen was found at alarming levels, the pills contained an excess of 3,000,000 mg per tablet. These levels are shockingly far more than the FDA’s established permissible intake of 96 mg.

The link between NDMA in Zantac and cancer has been revealed in many studies since the 1980s. If you find yourself being a victim to this medication and show symptoms of any type of cancer, or have taken it for a substantial amount of time, you might need our legal help. It is not fair that the big pharma companies have concealed the Zantac cancer link from thousands of people. We are here to help you, our firm is well equipped to represent our clients.

TO EACH AND EVERY PERSONAL INJURY CLIENT

We promise a free initial consultation and an honest assessment of your case.

We promise that an experienced attorney will handle your case – not just some staff member.

We promise that you will end up with more money from a recovery than we will.

We promise that you will get a better outcome with us representing you than if you had represented yourself.

We promise that you never will never pay attorneys’ fees out of pocket – all fees will be paid after the case is resolved.

We promise that you receive a response to any message within 24 business hours.

We promise that we will intervene with medical bill collectors on your behalf.

We promise that you may speak directly with an attorney about your case – to answer any questions you may have.

We promise you that the percentage of attorneys’ fees taken from your recovery will be known to you prior to us taking the case.

We promise that we will communicate with you often and that you understand what is going on with your case.

Settled with commercial business association for improperly built and maintained staircase for approximately half a million dollars.

Words cannot even begin to tell what a wonderful, compassionate and professional attorney Mike is. He always goes above and beyond to help his clients. His law clerk Joel is always helpful and going to be an awesome attorney just like Mike someday.

I have been a client of Mike’s for over a year now and I wouldn’t recommend anyone else. He was always 100% honest, never sugar coated, told you worst case scenario but worked very hard to ensure the best results possible. Mike was a HUGE help in my case and honestly, without his help my case would have ended in disaster.

Following this discovery, Valisure submitted a citizen petition to the FDA on September 9, 2019. This petition requested that the FDA take action, including recalling all ranitidine products in the US, to protect public health.

Where did these warnings come from?

The warning regarding the drug came from the FDA less than two weeks later. Sandoz, a generic manufacturer of the drug, recalled 14 lots of the medication, and this sparked a wave of nationwide recalls. Since then, over 14 recalls of ranitidine and Zantac have been announced. You can check out more about the recalls here.

NDMA is an acronym that stands for N-Nitrosodimethylamine and is classified by the World Health Organization (WHO) as a probable carcinogen. This nitrosamine impurity is also an environmental contaminant and it can be found in water and food. While research is still ongoing into the effects of NDMA on the human body system, it is without a doubt, potentially harmful.

If you habitually take ranitidine medications for the prevention or treatment of heartburn, ulcers or GERD, you may be at risk of carcinogen exposure. If you have been taking the drugs for a long duration of time, you are especially more at risk. Constant exposure to the medication may increase risks of a varied number of cancers. Including but not limited to Colon or intestinal cancer, Uterine cancer, Esophageal cancer, Liver cancer, Pancreatic cancer, etc.

Our Zantac lawsuit attorneys have the knowledge, expertise and skill to assist you in receiving damages and unless you win, you won’t have to pay anything. If you have been exposed to this carcinogen risk through Zantac medications, do not hesitate to reach out to us. You can reach us on (707) 636-3287, we are always ready to offer our assistance.

We provide effective representation and fight aggressively for our clients. Most importantly, we are committed to keeping our clients as top priority. Contact us today to see how we can help you get the most compensation for your losses.